Are you looking for test card numbers?

Learn how to set up and use the UX410 unattended payment terminal. 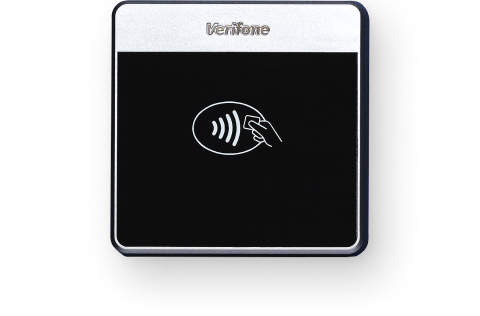 The UX410 payment terminal allows shoppers to pay with a contactless card or a mobile wallet by tapping their card or phone on or near the NFC-reader. Instead of a display, this terminal has indicator LEDs, an illuminating contactless logo, and a dual-tone buzzer to indicate the progress of the payment and other events.

These devices are intended for mounting in a self-service machine such as a vending machine, coffee machine, token dispenser, or parking payment system.

Get your new unattended terminal up and running:

There are four LEDs above the contactless logo. LED 4 is to the right of the logo. When LED 4 is blinking slowly, you are ready to process payments!

For the NFC-reader, the front of the self-service machine must have an installation panel of about 2mm thick with a cutout and 4 mounting holes.

During the installation, the UX410 terminal obtains its configuration by boarding itself to your store. Contrary to most other terminals, you always need to assign an unattended terminal to a store before boarding the terminal.

Because payment terminals process sensitive card data, you must verify that the terminal you received is the correct one, supplied by Adyen, and hasn't been tampered with.

If any of the above checks fails, contact our POS Support Team immediately.

Apart from the supplied components, you will need at least:

The controller beeps. After approximately a minute, a green light and an amber light on the LAN port turn on. The terminal starts boarding.

When you finish the installation, the UX terminal starts up, connects to the network, and boards itself to your store. The LEDs indicate the steps in this process.

The steps may go too fast to follow. But if an issue occurs, the LEDs indicate the step where the process has stopped:

If boarding doesn't succeed, the terminal will try again after two minutes. Remember that the terminal can only board if it is assigned to your store.
After ten retries, the terminal stops trying to board. You can't tell it has stopped trying; LED 3 continues to blink and LED 4 remains on. You can trigger the boarding process again by disconnecting the controller unit from the power source, and then connecting it again.

During the boarding process, the LEDs indicate the progress. There are various other events and situations that are also indicated with LED signals. We describe a few of them here.

The terminal has received a payment request and is ready for the shopper to tap their card or phone to the NFC-reader:

The shopper has tapped their card or phone and the NFC-reader has read the card details:

The terminal has failed to load its keys and needs to be replaced:

A red LED 1 indicates a warning. The terminal may have been tampered with.